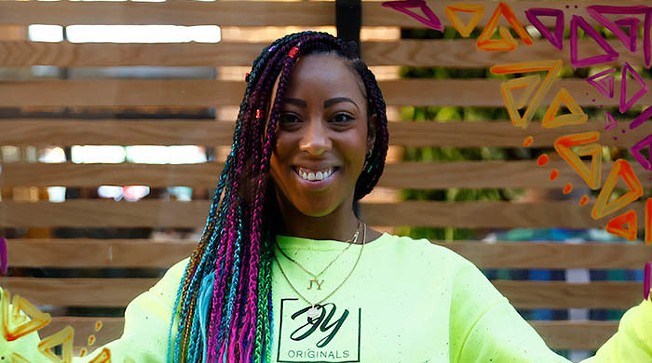 Artist and Pittsburgh native Janel Young has made her mark across the city with a number of public projects. Now it will extend its influence to neighboring county Westmoreland with a new partnership.

It has been announced that Young, who produces work under his company JY Originals, will begin a seven-month residency at Westmoreland Museum of American Art in Greensburg, Pennsylvania. During the residency, which begins March 6, Young will create an installation within the museum while also working on a public art project in the community, according to a press release.

Young will also interact with the community through free public programs to be announced later on the museum’s website.

“We are delighted to welcome Janel to Westmoreland,” said Erica Nuckles, Director of Learning, Engagement and Partnerships at Westmoreland. “Her work is vibrant and joyful, playful and poignant, and we are thrilled to see what she creates during the residency.”

Westmoreland’s Artist-in-Residence program hosts two to four artists a year and strives to underscore the museum’s commitment to “engage and support black and marginalized artists, promote equity in the arts, and share captivating and meaningful cultural experiences with the regional community”. .” The program is part of an ongoing partnership with Pittsburgh’s BOOM Concepts Arts Incubator and Gallery.

An active and incredibly prolific artist, Young has produced a number of public installations and painted murals throughout Pittsburgh, both individually and in collaboration with other artists. New spatial spheres, a series of pandemic-inspired socially distanced artworks, popped up across the city in 2020. Visitors to the 2021 Three Rivers Dollar Bank Arts Festival most likely saw “Pathway to Joy” , a large asphalt mural created by Young for the event’s Allegheny Overlook pop-up. up to the park experience. Also included is “Heroes on the Horizon”, a permanent three-dimensional mural on Larimer’s Bakery Square made with students from local schools Lincoln K-5 and Urban Academy of Greater Pittsburgh.

Young also made an impact outside of Pittsburgh with “Be Open To…”, a work presented at the 2020 US Open tennis tournament in New York. In February 2021, Young became the first artist to design the Black History Month logo for the online search engine Yahoo.

These, and other projects like her Mural “Respect the space” always visible at the bus stop located at Smithfield Street and Sixth Avenand downtown, led to Young being named one of Pittsburgh City Paper’s People of the Year in the Visual Arts category in 2021.

“I am thrilled to expand my practice into Westmoreland County and grateful for such a wonderful opportunity that BOOM Concepts and the Museum have put in place,” says Young. “There is plenty to be excited about, and I look forward to not only contributing, but also learning and experiencing during my time there.