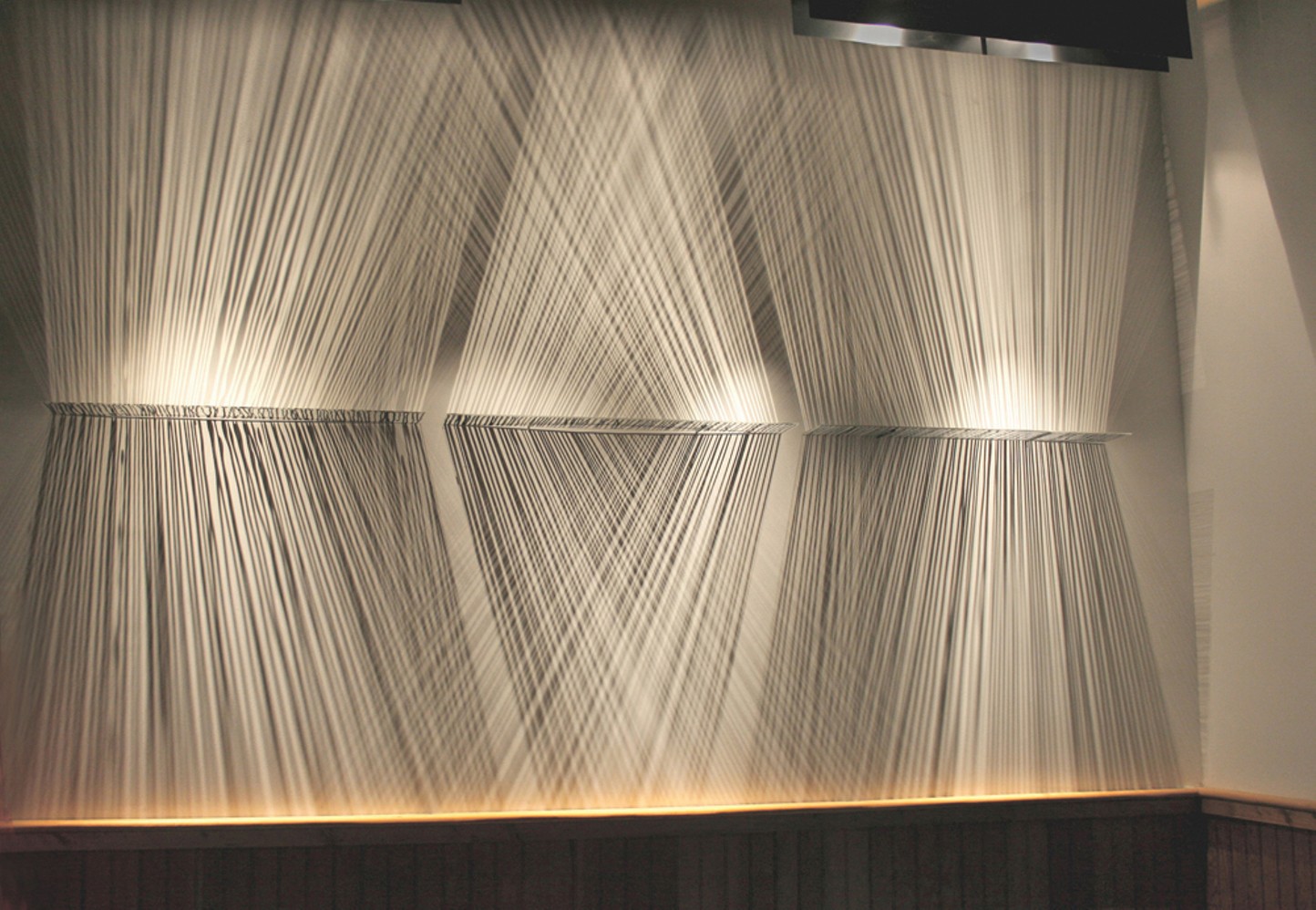 When there is a knock on the door of Sydney Cash’s studio, a nervous forty-year-old responds with an intense and inquisitive gaze, the very man he concentrates on his art, stretched out on the work table behind him. His mind still burning in the sixth decade of his career, he excitedly asks if the visitor wants to see what he’s working on now. “In many ways, I think I’m a research scientist,” he proclaims. “It’s what I’ve always done and it’s the most exciting part of the process for me.”

Currently, Cash is interrogating material fabric, a prosaic checkered metallic material. He applies wall paint to it in different ways – pouring, brushing, dipping, poking, repeatedly blowing – to see what happens. He observes that “there is nothing more representative of contemporary art than the rectilinear grid”, adding that “this work offers a convergence of engineering, architecture and mathematics”.

The aim of this investigation, like most of the others he has undertaken, is to produce art that conveys meaning beyond its material presence. In an increasingly virtual world, Cash scientifically approaches the empirical reality of the work he does in an effort to reveal, however fleetingly, a glimpse of transcendence. His way of situating the meaning of art both for himself and for the viewer is to perceive the invisible in the visible.

Cash’s mother noticed that her boy liked to do things – he was good with his hands. She took young Sydney to the Detroit Institute of Art for Saturday classes and had him build a workbench. At Wayne State University, he first studied metallurgy but eventually earned a degree in math. His current studio — with every wall, shelf, and available surface teeming with works in progress jostling for attention with pieces from 30 or 40 years ago — certainly resembles a place where an artist operates. But when you listen to Cash describe his practice, his scientific framing seems to make some sense, even if his professional background is a portrait of the artist he really is.

Born in the basement

Cash moved to New York in the 1960s. A resourceful go-getter, he struck a deal with his super to use a basement room in his building as a studio. There he developed the sculptures he had started making in Detroit from casts of ancient gargoyle sculptures. Soon he found a buyer in Bloomingdales who wanted to retail the sculptures. Sales went well, and Cash eventually opened a shop called Gargoyles in Greenwich Village. He had started his career as a professional artist.

Cash feels he has “great permission in the material world, that [he] is intimate with the materials. Glasswork became the focus of his artistic practice as he became involved with convex mirrors. Cash loved the thoughtful distortions they made. He is largely self-taught and is constantly experimenting with new ideas. Cash is also blessed with what he describes as a “gift”, which allows him to view an ongoing process in great detail, “almost like watching a video in his head”.

Moving to the Hudson Valley with his family in the early 1980s, Cash is perhaps best known for his innovative glass work, transforming flat glass into dimensional shapes in an electric furnace. (Casting is a technique in which items are made in a furnace by shaping glass on molds at high temperatures.)

His art has been exhibited widely in respected galleries and has found its way into various collections, including the Corning Museum, Museum of Art and Design, and Museum of Modern Art. As well as his home studio in Marlborough, he has another about a mile away which houses larger works. Recently, he rediscovered large glass pieces from the early 90s that he had completely forgotten about. Cash admits he’s somewhat impatient and has no interest in repeating himself.

Around 1980, Cash began to work with nichrome wire, which was stable at high temperatures, malleable and resistant. He used it in his glass sinking process with amazingly beautiful results. “If an artist is focused on finding beauty, he’s taking the wrong approach,” Cash says. “Beauty arises by itself, you can’t force it.” Every day in his studio is a foray into the unknown guided by his granular knowledge of the properties of the materials he handles.

His groundbreaking sculpture from this body of work, The triple pane, was imagined in a dream. The process revealed by the dream began with a triangle of flat glass positioned on a triangle of nichrome suspended from a steel support, all placed in an oven. Cash recalled in waking life he witnessed through a peephole in the wall of his kiln the formation of the sculpture: “Pulled by gravity as the temperature of the kiln increased, the glass began to go down.” The supple central section of the sculpture formed and the three elegant support legs stretched down to the floor of the oven where they gracefully bent into feet. “It was like magic,” he says. “After setting everything up, I didn’t touch anything.” The fully emerged sculpture has become something of a holy grail for Cash. He then made several distinct variations on this theme using different types of glass, working at different scales, and altering the underlying structure, with each iteration achieving a different expression of what Cash calls “wonder.” 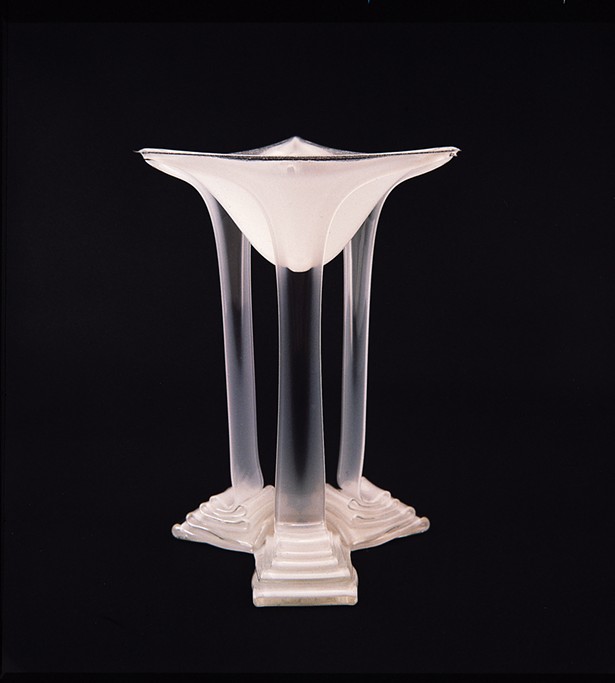 Over the past decade, Cash has worked with lights, glass and mirrors to create fashion pieces that generate intricate, interactive patterns of light, reflection and shadow on surrounding walls that create a clear- fascinating, abstract and site-specific obscure. His black grids, in oil on portraits, some photographic, others reproductions of historical works, bring out the hidden dimensions of the characters represented. Cash has also studied pattern making for herself, designing tools to manipulate paint in complex yet spontaneous and highly energetic ways. He photographed, enlarged and painted antique prints showcasing the skillful handwork used in their original making, bringing the past into the present without irony and respect, while avoiding nostalgia. He even made a self-portrait combining each of the individual credit cards, with part of his face printed on.

On the workbench in the workshop is a room with two partially closed mesh cylinders opening on each other. A pinkish paint of slightly different hues, values ​​and viscosities was poured over it. Some squares of the grid are covered with paint, others only partially, others not at all. The cylinders rest on a mirror. Under the mirror, they extend for a few centimeters, creating the illusion of going through the glass. Cash declares this piece to be the most accomplished and personally satisfying of his currently emerging body of work to date. He goes on to say that looking at it, he felt a sudden surge of goodness. Benevolence towards oneself, self-acceptance, but also benevolence in a more general sense.

Cash recalled the long, silent Buddhist retreats he often attended, where the ineffable sometimes became visual. Sometimes, in the studio, a flash of electricity will go up his back. “Everything gets a little bright,” he jokes, adding a touch of humor. “It tells me to pay attention to what’s going on, it’s important.” But being important isn’t it. Instead, it’s the experience itself, unmediated. ” Without intermediary ! Everyone should come to art this way,” exclaims Cash. In that moment, he had discovered something immeasurable: a direct experience that, for a wordless and unquantifiable moment, open his heart and maybe do the same for others. What will the next experience bring?

2022-04-01
Previous Post: “A Light Year” by Shio Kusaka celebrates the essential qualities of ceramic art
Next Post: Southern University’s Faculty of Visual Arts Offers Different Perspectives of the World in the Show | Entertainment/Life