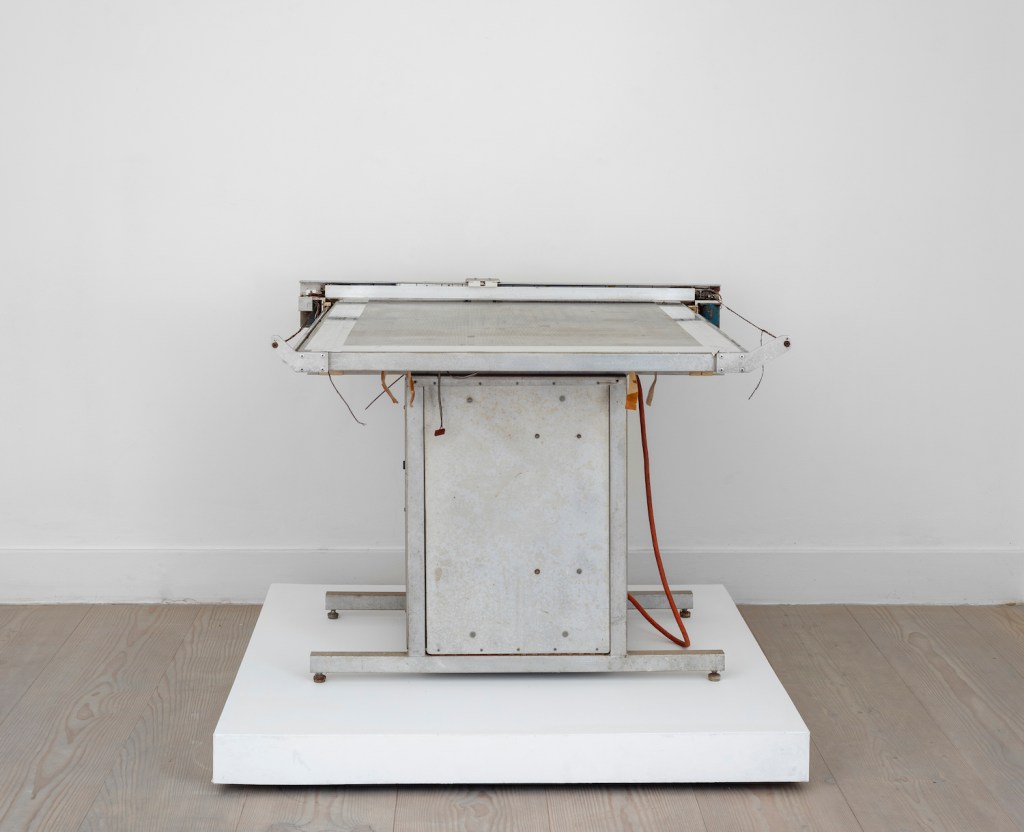 Generative art may have its roots in Dada artists in the early 20e century, but artist Harold Cohen is considered the pioneer of the technology-based genre. He became one of the first practitioners of automated art when he built a code machine capable of producing figurative paintings.

In the late 1960s, Cohen, a once languid painter, was working as a lecturer at the University of California, San Diego in the visual arts department. Around the same time, computer science researchers at the university were beginning to use artificial intelligence to innovate in mathematics. Inspired, Cohen began exploring the use of computers in 1968, and by the early 1970s had built a computer system dubbed AARON to create paintings from pre-programmed algorithmic code.

He would eventually unveil AARON and the resulting works at the Los Angeles County Museum of Art.

A new exhibition at London’s Gazelli Art House gallery explores Cohen’s enduring contribution to art and technology. The showcase, titled ‘The AARON Retrospective’, comes two months after the London dealership announced representation from Cohen’s estate. The artist died in 2016 at the age of 87.

On view through Nov. 16, the exhibit includes 18 works spanning Cohen’s figurative paintings, as well as the vintage steel machinery Cohen used to execute them. This is the second exhibition dedicated to Cohen’s work, the first of which was during his “Code of Arms” group showcase in 2021 which focused on the pioneering AI artist.

The works Cohen produced with his then nascent technology bear little resemblance to the stark graphic aesthetic associated with today’s virtually generated AI images. His paintings of varying colors depict figures often gathered together in communal leisure, as well as curious portraits and abstract shapes blending against bright pink backgrounds.

Gallery founder Mila Askarova said ART news that the show represents a “full loop” of what Cohen did over his decades-long career as he navigated the development of his machine. Cohen moved back and forth between abstract forms and fleshed out figures while continuing to refine the capabilities of the program. In canvases produced from the 1980s to the mid-2010s, groups of figures can be seen balancing in sync mid-exercise, while vibrant abstract forms intertwine in cartoonish expenditure.

Looking back at Cohen’s work, Askarova says, raises questions about the “autonomy of technology” and its promises of collective progress as the virtual landscape becomes increasingly intertwined with our reality.

“At each stage of AARON’s development, Cohen analyzed the extent to which the machine would operate autonomously and work with and on it accordingly. When AARON started using color in his works, it introduced an element of chance,” Askarova said.

In 2002, according to Askarova, Cohen remarked, “I could not have predicted when I finally broke through my brick wall that AARON would in many ways become a better and more vigorous colorist than I have ever been. .”

Different editions of Cohen’s machine stand out like sculptural forms in the display case. A late 1960s bot called Tortoise, a steel mechanism comprised of three stacked boxes with an analog interface, appears through today’s lens to look like something out of a vintage sci-fi film. Used for drawing, Tortoise brought to the fore the technology from which AARON was built.

For another machine produced later in 1980 called Drawing machine (arm), a robot made of steel, copper, and plastic, Cohen affixed an arm that enhanced his predecessor’s drawing skills.

The technologies “paved the way for the human-machine dialogue and collaborations that occur to this day,” Askarova said.