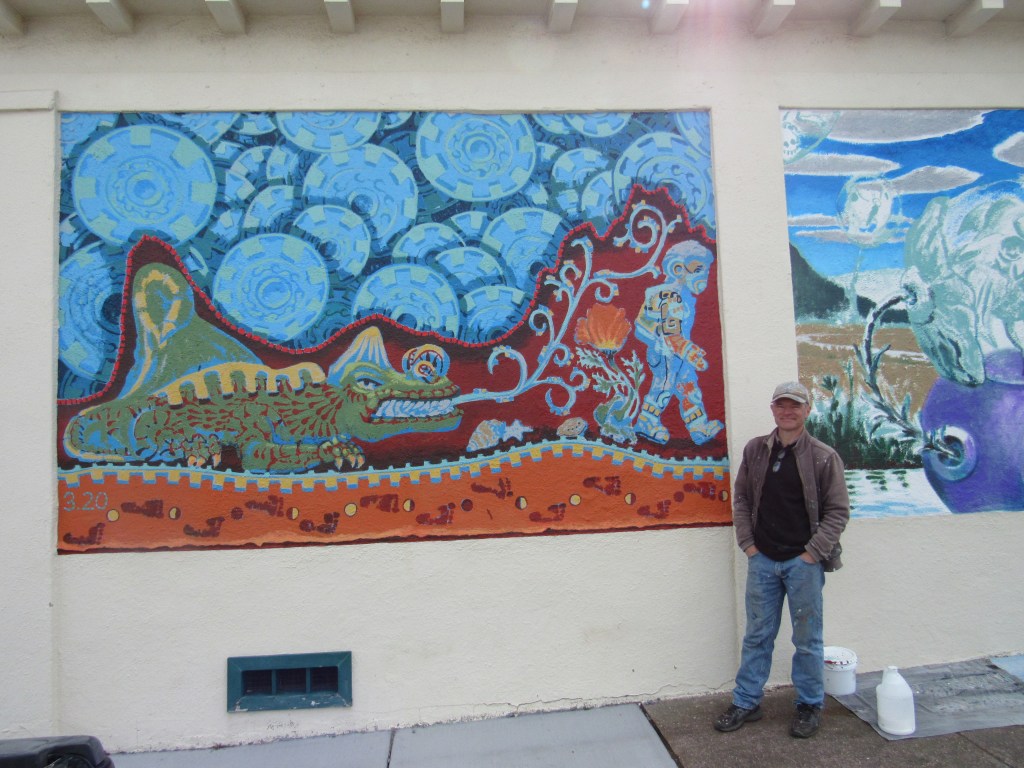 FORT BRAGG, CA – Two new murals are being created in downtown Fort Bragg, allowing locals and visitors to watch the art unfold. They are part of the Alleyway Art Project, a local non-profit organization responsible for eight previous murals, including the most recent ‘Queen Bee’ and ‘Be A Light’ murals on Main Street. The murals in the Alley Way Art Project complement existing murals that the City of Fort Bragg commissioned in their 2017 mural competition, as well as individual efforts that adorn the downtown area.

Jason Godeke, an art teacher from Fort Bragg, adds two signs with a working title of “3-20 to 3-22” on the same building that currently displays his piece “Sub Rosa” at the corner of East Laurel and North Harrison. The two panels have different styles and influences, but they form a whole as each depicts the collective experience of the two years between March 2020 and March 2022. Godeke connects the disparate styles with a line depicted as mountain ranges. Godeke has included a bit of mystery in his work but prefers viewers to find their own meaning in the piece.

The left panel, as “Sub Rosa”, is inspired by wall paintings from the Teotihuacan region in present-day Mexico, dating from: 1 – 750. They are a contemporary interpretation of ancient works originally painted in interiors of the city. While Teotihuacan murals primarily depict religious deities, Godeke uses fantastical creatures and modern imagery to draw attention. There are many elements in the piece, including a large cave-like image where a dragon appears to be chasing a child.

The right panel is inspired by the Flemish/Dutch artist Hieronymus Bosch circa 1450 – 1560. Bosch was known for his surreal and often morbid depictions of religious subjects and universal human emotions including desire and fear. Bosch captured the isolation of the individual surrounded by crowds. Godeke’s play builds on this, but instead of using human forms, he relies on animal forms to tell the story.

The mural should be finished by mid-May. Godeke grew up in Caspar, studied art abroad in high school, and graduated from Yale University and Stony Brook. He has taught at the de Young, the Richmond Art Center and the University of Bloomsburg. He currently teaches art at Fort Bragg Middle School.

The second set of panels, “Redwood Frolic”, consists of three interlocking pieces that marry elements of cubism and collage. Artist Sally Rodriguez borrowed the idea from a Flockworks project where elementary school children were given the same Picasso print, cut it out, and rearranged it to create unique pieces. While the mural nods to Cubism, Rodriguez explained that Cubism looks at everything from three angles, and his piece doesn’t meet those criteria. Murals on the side of the Little Cup store on East Redwood facing North Franklin are in progress and should be complete by May 6 for the first Friday.

Rodriguez incorporates historical elements and folklore from Redwood Avenue. She included pieces from current and past companies; a Chinese takeout box, a Greyhound bus, a cup and saucer mixed with neighborhood dogs and angels. The books date back to when Wolfman Bookstore was there. Additional elements include a barber pole, an old trailer that sits behind the Larry Spring Building, and the local blacksmith that is currently the site of FloBeds. Over the next few weeks, she will add additional elements to the canvas. Community members can tour the room and guess what each item represents.

Rodriguez lives and teaches art in Fort Bragg. She is originally from the East Bay area and has organized and promoted community art for over 19 years. For more information on the Alleyway project, visit www.fortbraggalleywayart.org.