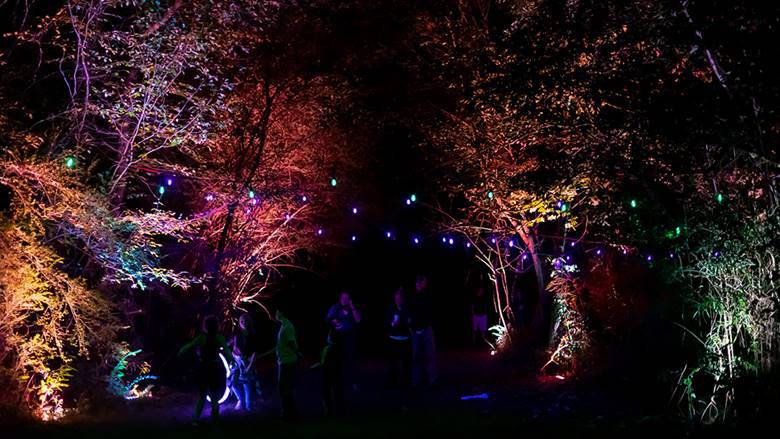 With engaging visual art projects culminating in a lantern parade on Saturday May 21, Tuscaloosa Stream works to foster environmental stewardship between the University of Alabama and the greater community of Tuscaloosa, particularly for the Black Warrior River and its tributaries.

When they met, Grimes and Brock found that despite their different backgrounds in conservation practice, they had a common interest in local landscape, environmental justice, outreach, and stewardship.

“We have a vision of how this will be very beautiful and amazing, but part of our vision is that a lot of people will achieve this by just being themselves,” Grimes said.

Grimes said that with Flow Tuscaloosa, they wanted to encourage people to engage in conversations about stewardship and understand their community’s relationship to the waterways.

While thinking about stewardship and the kinds of natural resources they wanted to promote preservation, Grimes and Brock struck up conversations with Friends of Hurricane Creek, an organization dedicated to the health, restoration and general well-being of Hurricane Creek. This Tuscaloosa County creek has suffered from coal mining pollution, overdevelopment, poor building code enforcement and overuse of herbicides.

Grimes said Hurricane Creek was a shining example of a somewhat positive story and was the “focus of the spotlight” for this round of Flow Tuscaloosa. Since its founding in the 1990s, Friends of the Hurricane Creek, with the help of the Citizens Coal Council and the Alabama Environmental Council, has seen dramatic improvements to the tributary and local wildlife.

However, as Grimes and Brock began to develop broader concepts for incorporating a public audience into their activities, they realized it would be easier to navigate public access along the Riverwalk. So Flow Tuscaloosa focused on the Black Warrior River.

Along with ideas of environmental stewardship, justice, and awareness, the two coincidentally had an interest in organizing a lighting event, which evolved into the May 21 parade.

Grimes said he had created different smaller-scale outdoor lighting experiences designed to bring the community together in the past, so they played those ideas for the parade.

“I saw the power of beautiful lighting in the natural environment as a way to create an elevated experience,” he said. “So rather than trying to create something synthetic in the natural world, the real idea is that by lighting something up in the evening, you start to see in a different way what you already look at regularly.”

Flow Tuscaloosa held lantern-making workshops at each event on the first Friday of the Tuscaloosa Art Walk to prepare for the march parade.

At Dinah Washington Cultural Arts Center, customers browsed the art exhibits that were in the other sections of the center before discovering the Flow Tuscaloosa station. Around tables covered in arts and crafts materials, Grimes, Brock and volunteers educated people about Flow Tuscaloosa and their goals while helping them create unique paper lanterns from thin sheets of tissue paper. , small wooden sticks, tape and thread.

Grimes said they tried to ensure the lanterns could be disposed of easily “if they reached the end of their life cycle at the end of the parade.”

When constructing their lanterns, people were free to create vibrant and unique designs and patterns with various materials resembling organisms from the Black Warrior River ecosystem.

Grimes said that while lantern building is “pretty basic,” it’s a way to actively learn about the images people put on their lanterns, like dragonflies or historical structures, through participation and learning. community engagement to understand.

“And so this physical process of building a lantern. It also locks in much of what we want to accomplish because we are bombarded with facts. We are regularly bombarded with images and so we are looking for an experience that can slow down this process and hopefully once again elevate the learning from the experience and the involvement of our community when they join us,” Grimes said.

The parade began at 7 p.m. Saturday at the entrance to the Riverwalk.

“We will wait for the sky to darken a bit before starting the procession at 7:30 p.m.,” Brock said in a press release. “If you have come to a workshop and want to use one of our lamps, arriving at 7 o’clock will allow us time to outfit your lantern with a lamp.”

The parade ended at the River Market before crossing the street to the Mildred Westervelt Warner Transportation Museum.

After the parade, people hung up their lanterns and gathered in Queen City’s ‘reanimated’ swimming pool for ‘A Pool Party’. The swimming pool is filled on the grounds of the Transportation Museum and the Swimming Together exhibition inspires the event. The, people enjoyed food trucks, music, and a light installation by Lyndell McDonald, assistant professor and UA technical supervisor.

“There will just be time to really come together and commune with each other and with the local river guardians and other types of people who have an interest in the waterways,” Brock said.