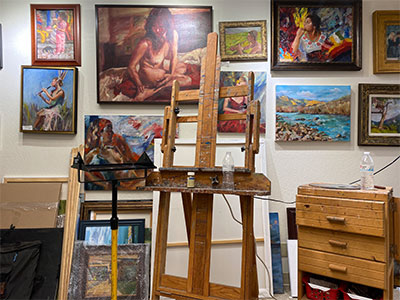 With more than 600 casualties since Russia invaded Ukraine three weeks ago and more than 25 million people fleeing the country, it is clear that the unrest and violence are not yet over. seen. Yet on Saturday, March 5, TMCC art professor Rossitza Todorova and part-time professor Galina Milton hosted a fundraising event to support Ukrainians using what they do best: their art.

On Saturday, March 5, TMCC Art Professor Rossitza Todorova and part-time professor Galina Milton hosted a fundraising event to support the people of Ukraine. Hosted at Artemisia Studios, over 50 local artists donated their artwork to support the United Nations Humanitarian Fund for Ukraine and the National Bank of Ukraine to support the Armed Forces of Ukraine. Works of art that spanned the gamut of styles and media lined the walls of the studio, which welcomed guests who came to support the cause. The one-day event raised over $7,700.

TMCC Part-Time Faculty of Visual Arts Galina Milton is a professional artist whose studio workspace is located at Artemesia Studios in Reno. Sales from the recent art exhibition will benefit the people of Ukraine.

Artemisia Studios houses the workspaces of Todorova and Milton. Milton, a professional artist who works in oil on canvas, also teaches drawing and begins art classes at TMCC. “I teach part-time because I need time to paint,” she explained. Teaching part-time at TMCC allows her to interact with the students, which she finds rewarding, while allowing her time to focus on her own artistic endeavors.

Still, the recent war with Ukraine has had an impact on Milton: she is originally from Ukraine and still has family living in the country. “Many of my relatives have left the region and they are all over Ukraine and they have to move again because the war is catching up with them,” she said. “It’s horrible to see war for the second time in ten years. For many of us, we have so many ties on both sides, on the Ukrainian side and on the Russian side. And unfortunately right now… there are mixed messages.

Todorova and Milton wanted to use their art for good. A week into the war, Todorova messaged Milton and suggested organizing a fundraiser. “I couldn’t sit idly by. Watching the news every day was heartbreaking. I am outraged that in 2022 we see bombs falling on civilians in Europe and innocent men, women and children dying,” she said.

Todorova, originally from Bulgaria, started calling and texting artists and community members and asking for donations. By the end of the week, over 100 artworks and artifacts were donated to the event. With the help of TMCC students as well as local artists, businesses and arts organizations, the event was a great success.

Those who stopped by were not only treated to an eclectic display of local art, but were able to take home tangible reminders of their support for this important cause. Todorova and Galina hope their efforts will make a difference in the lives of Ukrainians currently fighting for their country’s sovereignty and those who have fled as refugees to neighboring countries. “The outpouring from the Reno community gives me hope that we can end this conflict quickly and with as few casualties as possible,” Todorova says.

“We cannot be blind to the suffering of this war,” Milton said. “Artists can unite against aggression.”

For more information about TMCC Visual Arts, contact the department at 775-673-7291.