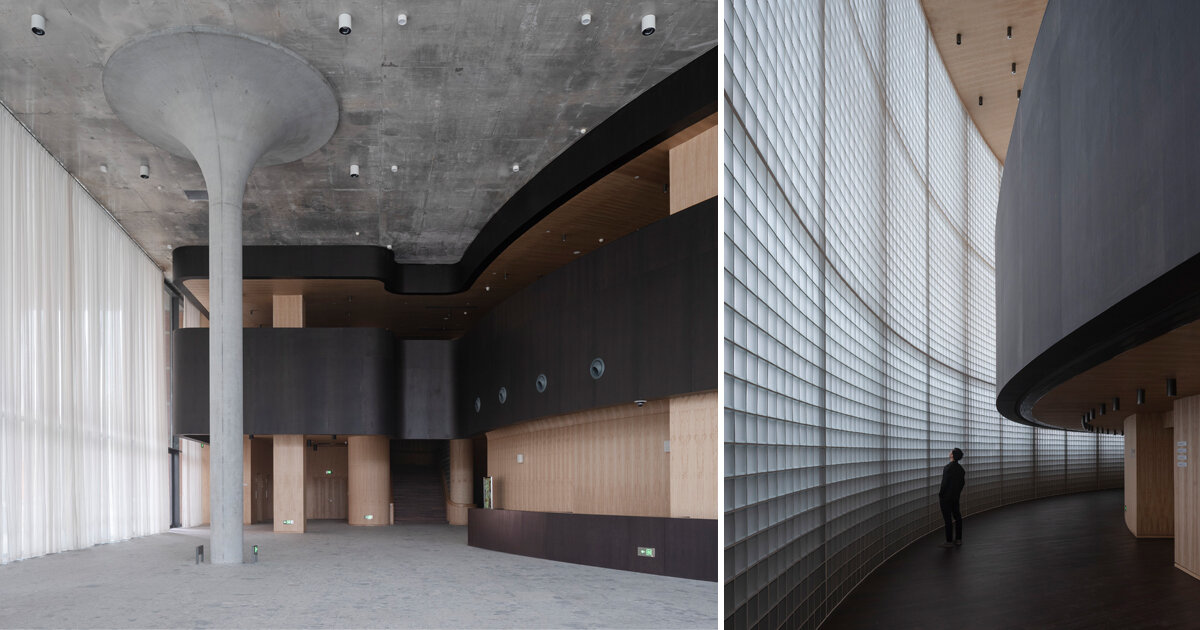 the berlin and shanghai offices of david chipperfield architects have designed a theatera music academy and a Hotel complex under a new master plan for jingdezhen in the east China. the city is famous for its porcelain production and this project transforms an area of ​​old factory buildings into a new mixed-use district.

the new theatre, academy and hotel are located in the eastern part of the site, which is being transformed into a performing arts campus with colleges, performance halls and additional infrastructure. david chipperfield architects developed the master plan for this area, which preserves, restores and converts existing buildings while complementing them with new buildings.

the main public amenities of the new jingdezhen cultural district are located on a boulevard on the west side of the area. the northern end is marked by the Grand Theatre, a new brick construction that refers to the traditional materiality of historic industrial buildings. it hosts two halls: a classical opera house and a black box theatre.

the auditorium of the opera is completely clad in walnut veneer and has 1200 seats. the interior is horseshoe-shaped with three balconies. with this classic European format, the auditorium reflects the meaningful connectivity of audiences and performers as a community who jointly experience artistic performance as a singular and authentic live event, as opposed to today’s digital environment. the black box theater, lined with black wood, allows various contemporary stagings thanks to its flexible and mobile stage space. in addition, the black box theater can be opened to outdoor space? taking into account outdoor concerts to be held on campus. 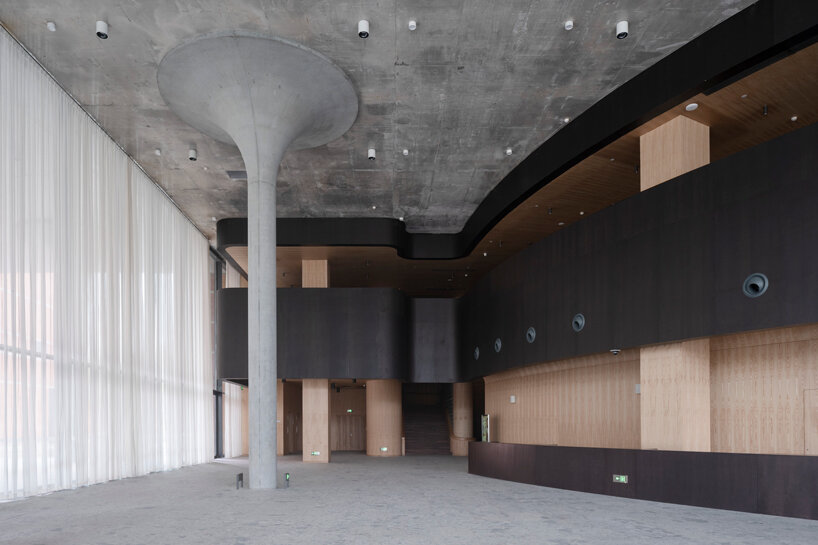 the two rooms of the large theater are accessible at ground level via a spacious foyer which opens the building towards the boulevard. the opera house’s horseshoe-shaped auditorium projects into the foyer where it is surrounded by an area of ​​wood-clad mantels and a gallery above. the in-situ concrete architecture of the large-scale foyer roof supported by mushroom-shaped columns creates a seamless transition between the trees of the boulevard and the interior of the grand theatre. the natural stone floor further connects the indoor and outdoor space. the curved auditorium also emerges externally as a perforated brick volume above the roof of the foyer, shining like a crown of light at night and giving the new venue a historic character. 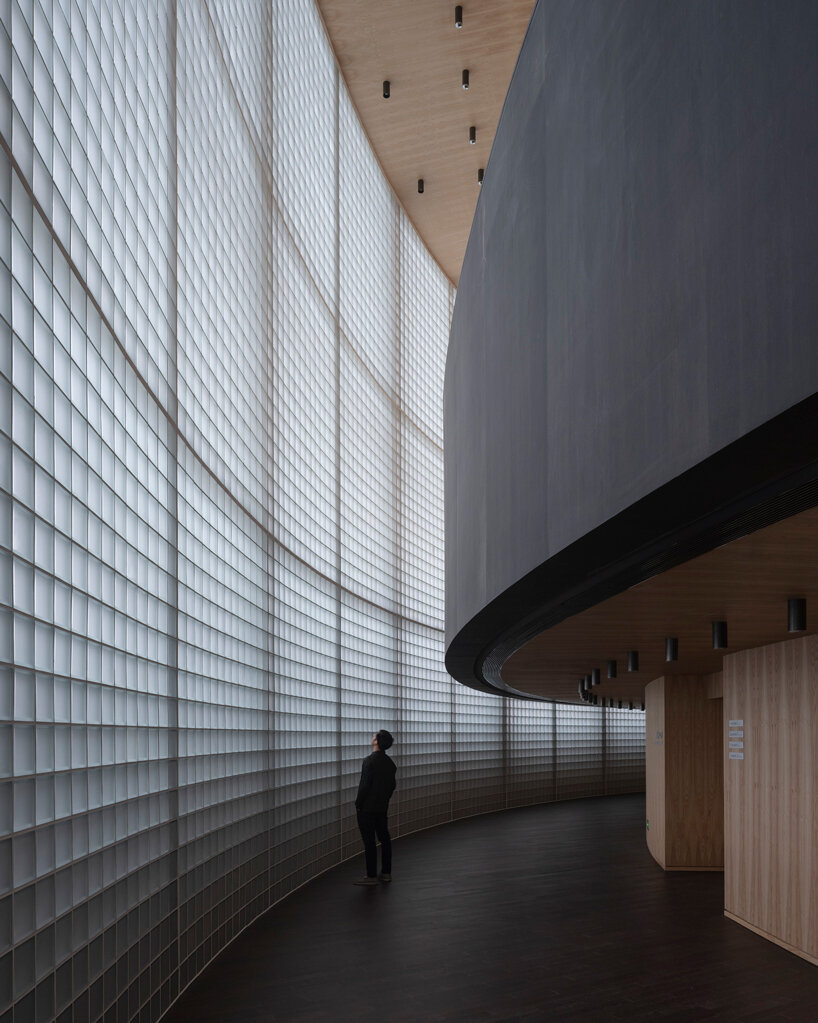 although not pictured here, the new music academy is located at the southern end of campus boulevard and will be housed in two former mid-20th century ceramic factories. david chipperfield architects used a sensible approach to the renovation, preserving the industrial atmosphere but replacing necessary elements such as corrugated metal roofs with tiles for improved thermal and sound insulation.

when completed, the largest north factory building will house a 350-seat concert hall as well as a ventilated foyer. the service facilities for the public as well as the practice rooms for the academy are housed in new wooden cubes, which are stacked inside the buildings as two-story structures. the architecture will be finished with high-quality materials, including maple veneer, pine wood and mastic asphalt, to enhance the industrial look of the historic buildings. 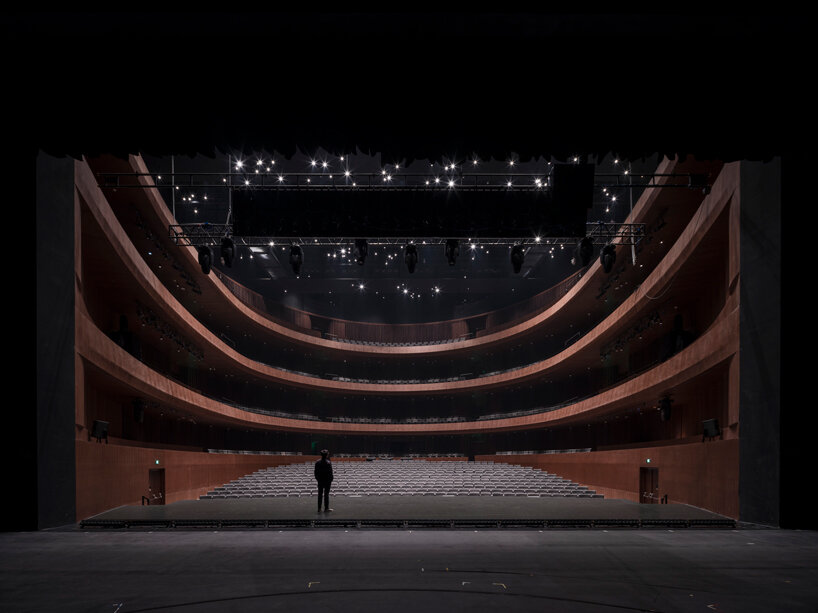 located between the grand theater and the music academy, the resort is at the center of the new jingdezhen cultural district. the complex consists of four separate buildings with a four-star hotel, a five-star hotel and an event venue. a spacious light metal structure connects the buildings at ground level creating common spaces for various public activities.

each of the hotel buildings contains an interior Yard with an individual landscaped garden, visible from each of the adjoining hotel corridors through a perforated brick wall, conveying a sense of place, tranquility and orientation. the southernmost of the two buildings directly adjoining the boulevard houses prestigious function rooms for a diverse range of public events. a former dormitory from the 1960s has been retained and integrated into the complex to complete the hotel as an apartment building.

in reference to the historic buildings of the factory, the bricks are mainly used as a local building material for the hotel facades, which thus integrate perfectly into the surrounding space. the semi-transparent facades of the reception rooms and the perforated balustrades of the hotel’s balconies act as a filter between private and public spaces. the staggered brick columns bring the overall volume of the building to human scale. 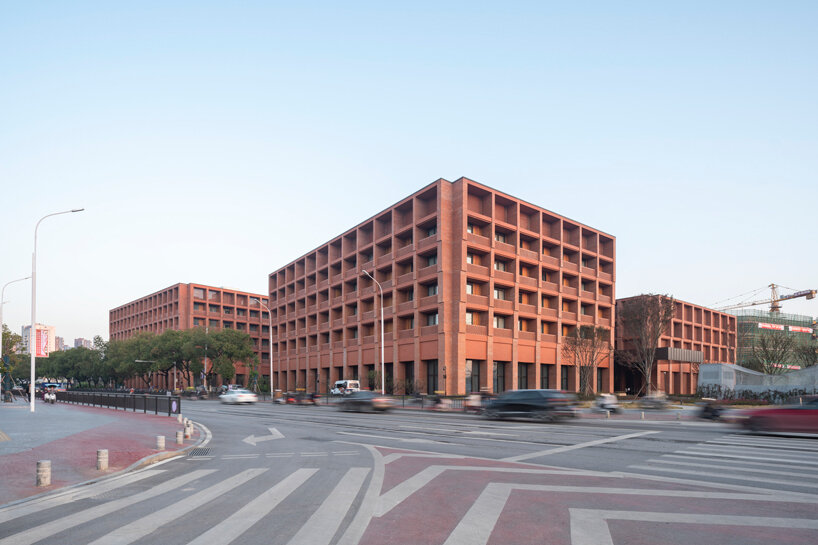 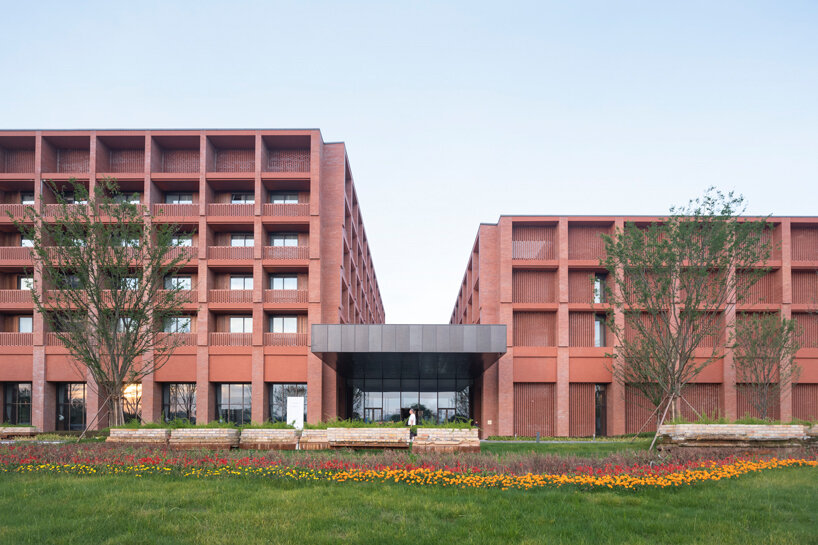 the complex consists of four separate buildings with a four-star hotel, a five-star hotel and an event venue 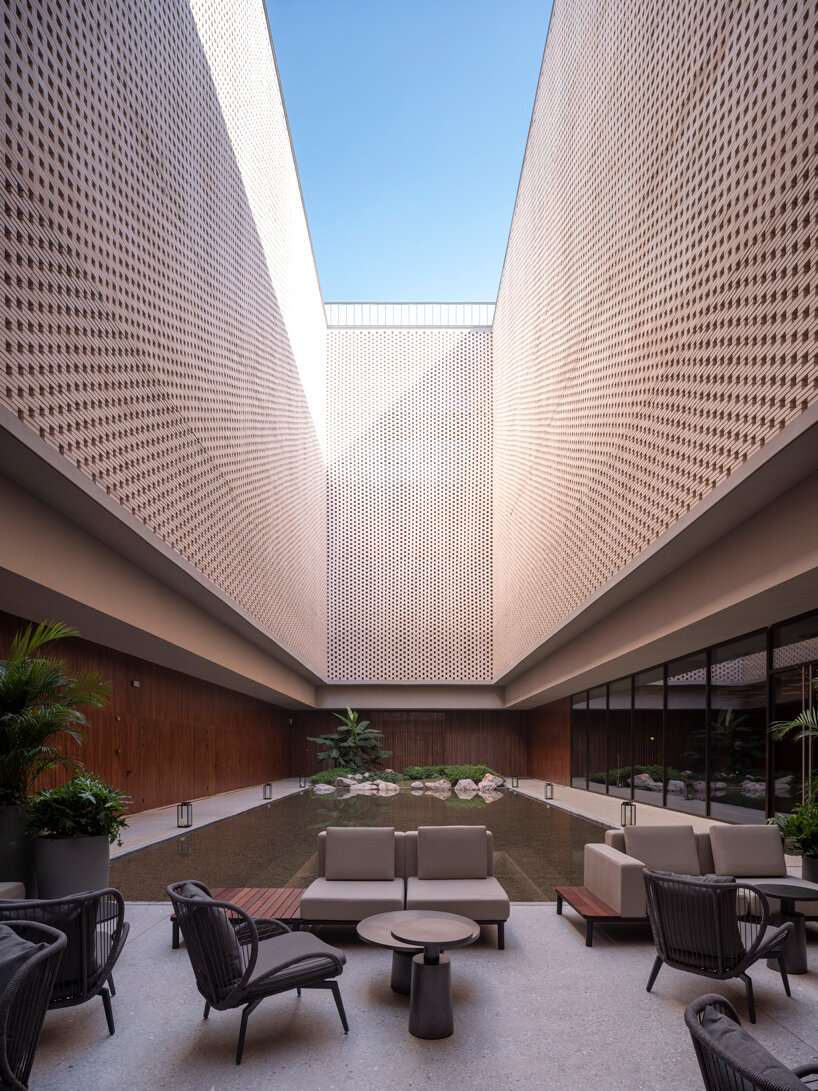