Benton End and the East Anglian School of Painting and Drawing (Firstsite, Colchester)

The East Anglian School of Art was Suffolk’s answer to the Charleston farmhouse of the Bloomsbury set, with a dash of Dartington Hall’s utopianism.

Founded in Dedham in 1937 by Cecil Morris and Arthur Lett-Haines, the school moved to Benton End in Hadleigh in 1940, after the Dedham Art School fire: Lucian Freud’s smoking cigarette butt was the prime suspect.

Freud was an early student, having recently been expelled from Dartington. by Morris Cotyledons & Eggsoil on panel, from 1944, is a companion of Eggswhich illustrated a 1955 article by Elizabeth David, later becoming the cover of An omelette and a glass of wine. Benton End was a Who is who of post-war Britain, Morris provided plants for Beth Chatto’s garden.

Firstsite’s exhibition, organized with the Colchester Art Society, strives not only to showcase the most famous students – Freud, Maggi Hambling and John Nash – but also to draw attention to lesser-known talents, including Rosemary Rutherford, an unofficial war artist, Lucy Harwood and children’s author Kathleen Hale.

Dicky Chopping, who illustrated Ian Fleming’s novels, has a book illustration and artichoke drawing, a study for a larger optical illusion, exhibited with Morris’s paintings of plants and birds. Chopping’s partner, Denis Wirth Miller, is represented by two landscapes and Watercolor after John Nash. At their home in Wivenhoe, Chopping and Wirth Miller enjoyed a touching time with neighbor Francis Bacon.

Nash, the first living artist to receive a retrospective exhibition at the Royal Academy, has a landscape from the RA’s 1967 exhibition, February Evening, Glemham, Suffolk, painted in 1958. While Winter’s River Valley by Nash is a tangle of bare branches framing a mirror-calm water, Wirth Miller’s work is a softer, more symbolic landscape, where planes of yellow and green create field outlines, and the foliage of the trees is a wide slash of rust and gold in the center.

‘Life with Art’ reflects East Anglian’s philosophy of being an art school for all, and there are empty frames waiting to house the works created by visitors. Morris welcomed anyone willing to work and who could manage “three guineas a week and bring your own sheets”.

Maggi Hambling paid her fees by working in the kitchen at Benton End. A duet of four portraits of Frances Rose, Hambling’s neighbor in Clapham, forms the focal point of the first room of the exhibition. The pair create a poignant distillation of old age. In the larger work, Rose’s arthritic hands draw the eye to the lower part of the canvas: they are a twisting mass of livid purple, blue and yellow, but the outlined fingers add dignity, highlighting oval-shaped nails and a wedding ring.

In the head and shoulders portrait, the brushwork impasto makes the sitter’s nose and nostrils proud of the canvas, and her eyes, with an eyelid bearing the red swelling of cataract surgery, stare through thick layers of surrounding paint. 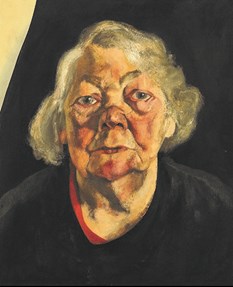 Hambling acknowledges the surrealist Lett-Haines as his great mentor, and his portrayal of his final months, let dream, shows the artist on a bed, his jaw and socket line edged in heavy gray, with slippers dangling from his shod feet, as if about to fall out of frame and onto the floor. Contrasting with the snow-covered pillow and sheets forming a soft cocoon, a precisely striped carpet in gold, black and orange, like a tiger, creases across the image, lending majesty to the deathbed scene.

Rosemary Rutherford is one of Benton End’s rediscovered stars. Daughter of John Finlay Rutherford, vicar of Broomfield, she was granted permission to record her experiences as a nurse by the War Artists Advisory Committee. A 1941 watercolor shows a brother and sister, possibly from Kinder Transport, seated on a box, the color palette in Two refugee children growing paler and thinner as it progresses to their watchful, wary faces.

Nehemiah, Rutherford’s design for a 1960s stained glass window, depicts the blue-robed royal cupbearer (Nehemiah 1.11), his head bent over a chalice held in outstretched arms, which split the plane in two. A darkly rendered figure on a donkey works on a hill in the lower left quadrant, while an expressive city in sketched black lines forms the background.

Rutherford is one of several artists to have painted the Benton End garden, showing the centrality of the school in British artistic life.