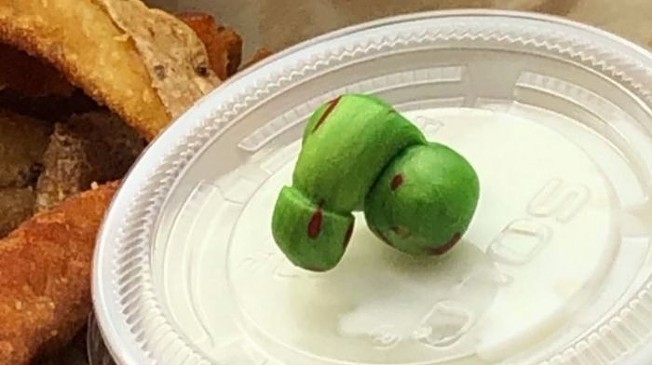 Penis art may have strong associations with middle school and high school whiteboards, but a local artist is putting a new spin on the art form through the @412dickrescue Instagram account.

The account’s first post, titled “Where’s Richard?”, dates back to May 20, 2021, with cocks dropping every day or a few days around Steel City – with a few exceptions that are hashtagged accordingly. The tiny cocks, no larger than several centimeters in size depending on background objects, range in color from cherry red and grassy green with brown flecks to swirling purple and sky blue.

Where they come from is unclear. The Instagram account’s biography reads, “In my early 40s, I made hundreds of tiny dicks for no reason. Now I release them into the wild.

The tiny cocks were left nestled in the bark of trees, resting on the ledges of basement walls and shelves, and sitting on lamp posts, among other things. Although there are no explicit instructions on the posts, the hashtag “stellcityphallusfinders412” suggests that account followers – or anyone else who happens to be on the tiny dicks in the wild – are encouraged to take them and to give them a new home.

Most posts include a long block of hashtags, including “412dickrescue”, “peendemic”, “istheracockonyourblock”, and “cockblocked”. The artist has also included art-related hashtags to attract others outside of the dick-lover niche, such as “queerart”, “sculpey”, “art”, and “finsta”. Pushing back against the assumption that genitals are inherently sexual, the artist also includes the hashtag “non-erotic.”

As works of art, the dicks are subject to the artist’s interpretation of the body part and the viewer’s interpretation of the miniature sculptures. While some have more defined tips, others look smoother and cylindrical all the way to the head. They also feature a wide array of colors hopefully never seen before on a human dick, including a small red, white and blue dick that fell on a dumpster on July 4th.

The dicks are also flabby – otherwise there’s something deeply wrong with the balls – which leaves some of the more colorful tiny dicks looking like vibrant snails or eels. Some look like disfigured acorns or particularly curvy bananas.

What people will do with the little dicks once they find them is unclear and open to interpretation. Maybe they will be part of a new art project. Maybe they’ll sit on someone’s shelf for years as a little conversation piece. Perhaps the new guardians of small dicks will look after them with tender duty and responsibility.

It might be tempting to look for a deeper meaning to this art project, but maybe it’s wise to learn a lesson from the inspiration of the project. Sometimes it hurts to go too far. Instead, the people of Pittsburgh can enjoy chasing small dicks while it lasts. Because size doesn’t matter. It’s what you do with it that counts.