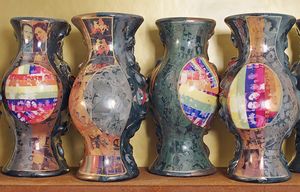 Ask any gay boy raised Catholic what it was like to be dragged to church every Sunday and seated before a slender, muscular, crucified Christ wearing only the skinniest of loincloths while a disguised man stood near the altar humming in latin. , and this boy will probably respond, “Very confusing.”

The show is witty, polished, transgressive and oddly moving. The pun reference in its title to oven fires and the sensibility of the camp underlines the spirit in which it is offered.

Review of the exhibition

The leader of this trio is Léopold L. Foulem. Born in 1945, he taught ceramics in Montreal for 20 years and counted Mathieu and Milette among his students. (Milette and Foulem are now married.) His philosophy of art subverts the usual notions of “artifact”.

“I believe,” he wrote in the “Camp Fires” catalog, “that true art is all about concepts and unquestionably not about medium or style or even workmanship.”

The sacred and the homoerotic are repeatedly aligned in Foulem’s work. “Banana and Cross” (1976), which features a partially peeled banana on a cross framed by coins, is a relatively low-key example of this alignment.

“Priest in Black Cassock with Boy on Mount” and “Pair of Two Male Couples in Pseudo-Rococo Setting,” both from 2012, push more provocative buttons. For one thing, the priest in both pieces is “played” by Kentucky Fried Chicken icon Colonel Sanders, and the boy is a ceramic replica of the classic painting by 18th-century artist Thomas Gainsborough, “The Blue Boy”. The plays’ allusions to the sex abuse scandals of the Catholic Church are obvious.

While Foulem lets himself go (phallic bicycle seats! Canadian gendarmes who “always have their man”!), his two former students explore similar ground in a calmer way.

Mathieu’s two mournful “Crucifixion Bowls” (from 1984) accentuate the homoerotic element in many depictions of the suffering of Christ. His teapot/cup couple in “Fluid Exchange”, discreetly interspersed with stylized nudes, evokes the fears of AIDS of the 1990s in a discreet but disturbing way.

“Kiss Vase 1-6” (2013) is even more complex. It brings together six heads which, on one side, show male faces with cheeks, chins and foreheads riddled with pairs of lips. The other side shows “snapshots” of smiling male couples, in a seemingly affectionate tribute to old friends and lifelong lovers.

Formally, Milette is perhaps the most interesting of the three. He continually revisits the shapes of classic Greek pottery – but with a twist. His urns and vases follow tradition closely in their outlines. Yet their surfaces are made up of jagged ceramic fragments from wildly diverse eras, featuring everything from Greek gods and Hollywood stars to Meissen floral designs and pop-art references.

Their idea of ​​fun can be both cheeky and X-rated. Curator Robin Metcalfe sums it up nicely when he writes that the three artists “find or generate queer subtext in all the straightest places.”