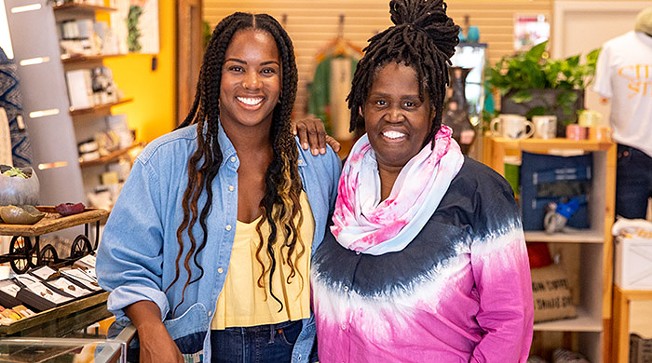 Brigette and Christine Bethea, owners of Argyle Studio in Oakland

Although they are related, Christine and Brigette Bethea are very different. Christine worked in creative fields, including writing for the fashion, radio and television industries, before embarking on a career in multimedia arts in the 1980s. Her daughter, meanwhile, has spent eight years in the US military and worked as a project manager for the Pittsburgh Public School District before founding his own business consulting firm, ULEAD.

It’s these differences that have allowed them to successfully team up on Argyle Studio, a pop-up gallery and marketplace on Forbes Avenue in Oakland, showcasing items from more than 30 local artists and makers.

The pop-up doubles as a platform for art sellers and a way to make Oakland’s business district more vibrant.

For a while, the pop-up, which officially launched in May and is set to run through March 2022, looked like that might not be happening. The pandemic delayed the initial opening scheduled for November 2020, just in time for the holiday season.

“Then it was January, then February, then March,” says Christine, adding that they eventually stopped being so choosy with the opening date. “We decided we were going to keep pace with how things were going, rather than anyone getting frustrated.” 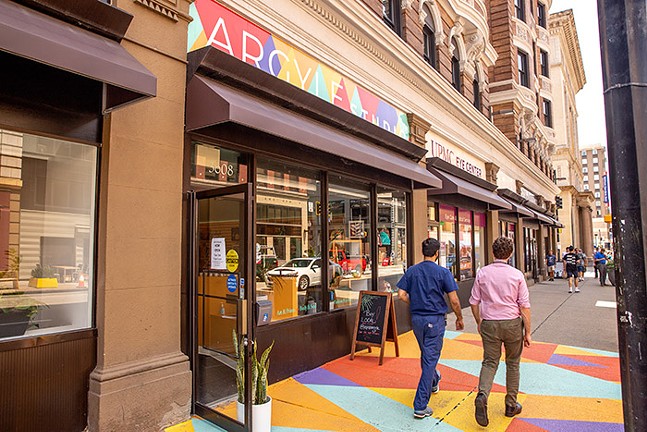 In addition to being owned and run by black women in a city now known for neglecting this particular demographic, Argyle also provides a source of exposure and income for working artists whose finances have been hit hard during the pandemic.

“Most of them are starting from scratch,” says Christine, an accomplished local fiber artist who helped found the black artist collective Women of Visions and has strong roots in the local art scene. “So it’s really important work, and I’m just happy to be able to do it.”

Brigette says they took a deliberate approach to choosing vendors, making sure to showcase a wide variety of products, as well as ages and backgrounds. She explains that Argyle’s setup is divided into five sections – Art and Prints, Home and Office, Entertainment and Leisure, Body and Soul, and Fashion and Jewelry – describing the pop-up as “almost like a mini-department store”. . ”

“It really came down to trying to make the space as eclectic as possible,” says Brigette, noting that it was important for Argyle to be “multi-generational” and a place where “all races, ethnicities and cultures felt at home. comfortable”. This means seasoned sellers are featured alongside newcomers, the youngest being 14 years old.

She adds that more than 50% of Argyle’s vendors are BIPOC (Black, Indigenous, People of Color) and include representation from the LGBTQ community.

While the two women had previously worked on projects together, the pop-up allowed their respective talents to shine through. As Argyle’s lead strategist, Brigette takes care of the logistics side of the business, while Christine acts as creative strategist, tapping into her vast artistic network and overseeing the store’s visuals.

“It’s a great time in my personal career because I feel like I’ve come full circle and can finally use all of the really wonderful skills I’ve learned over the years,” says Christine.

She also sees Argyle as a way to shine a spotlight on the local arts community, feeling that it never gets the credit or support it deserves.

“My joke is that when Pittsburgh loves its artists the same way it loves the Pirates and the Steelers, they will have done something,” laughs Christine. “I know this is going to sound grand, but I’ve known literally hundreds of artists over the 15 to 20 years I’ve worked in arts administration. There’s this whole city, it’s just full of really, really great talent, and a lot of it goes unrecognized. 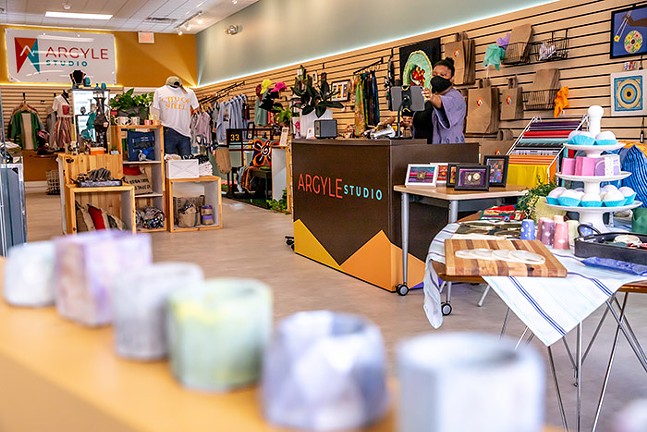 Rell Rushin behind the counter at Argyle Studio in Oakland

It would be a fair assessment to say that Oakland has a less vibrant arts scene than other Pittsburgh neighborhoods. Dominated by the University of Pittsburgh and Carnegie Mellon University, as well as medical centers, the area caters more to student and professional crowds looking for a quick bite to eat or a casual bar for enjoy a beer after work or class.

Organizations like the Oakland Business Improvement District have sought to change that by attracting more creative businesses, stimulating public art and using spaces like Schenley Plaza, which has seen an increasing number of live events since more and more people have been vaccinated.

Brigette says Argyle was born after the Improvement District requested proposals for non-food retail options in Oakland, particularly along the busy stretch of Forbes Avenue.

Georgia Petropoulos, executive director of the Oakland Business Improvement District, said there was a need for something like Argyle in the neighborhood.

“Argyle Studio is a perfect complement to Oakland’s commercial district,” Petropoulos says, adding that the pop-up “offers unique and hard-to-find opportunities for those entrepreneurs who wouldn’t normally have such exposure to the robust market of Oakland.” Oakland”.

Unlike many chain stores that populate Oakland, Petropoulos says Argyle’s artists and designers “provide new offerings of merchandise not found locally or even in the entire Pittsburgh area.”

A customer browses items at Argyle Studios in Oakland.

Christine says that while Argyle has seen steady business from visitors and people who work in the neighborhood, she looks forward to the return of students after the pandemic has largely taken them away from campus life.

“We didn’t see many students at all,” says Christine. “We’re very curious to see how that will change the dynamic when they’re full-time and all the universities are running at full capacity.”

She also wants the project to stand out as an example for local foundations and other groups that support independent retail concepts are essential to the health of a community. Argyle has received assistance from InnovatePGH, the Redevelopment Authority of Allegheny County Community Infrastructure & Tourism Fund, the City of Pittsburgh, and the Urban Redevelopment Authority. UPMC provided its showcase.

“It’s really good work, and I hope they do more,” says Christine. “It just shows what they can do if they all come together and reinvent the city, the landscape and the economic ecosystem, all of it.”