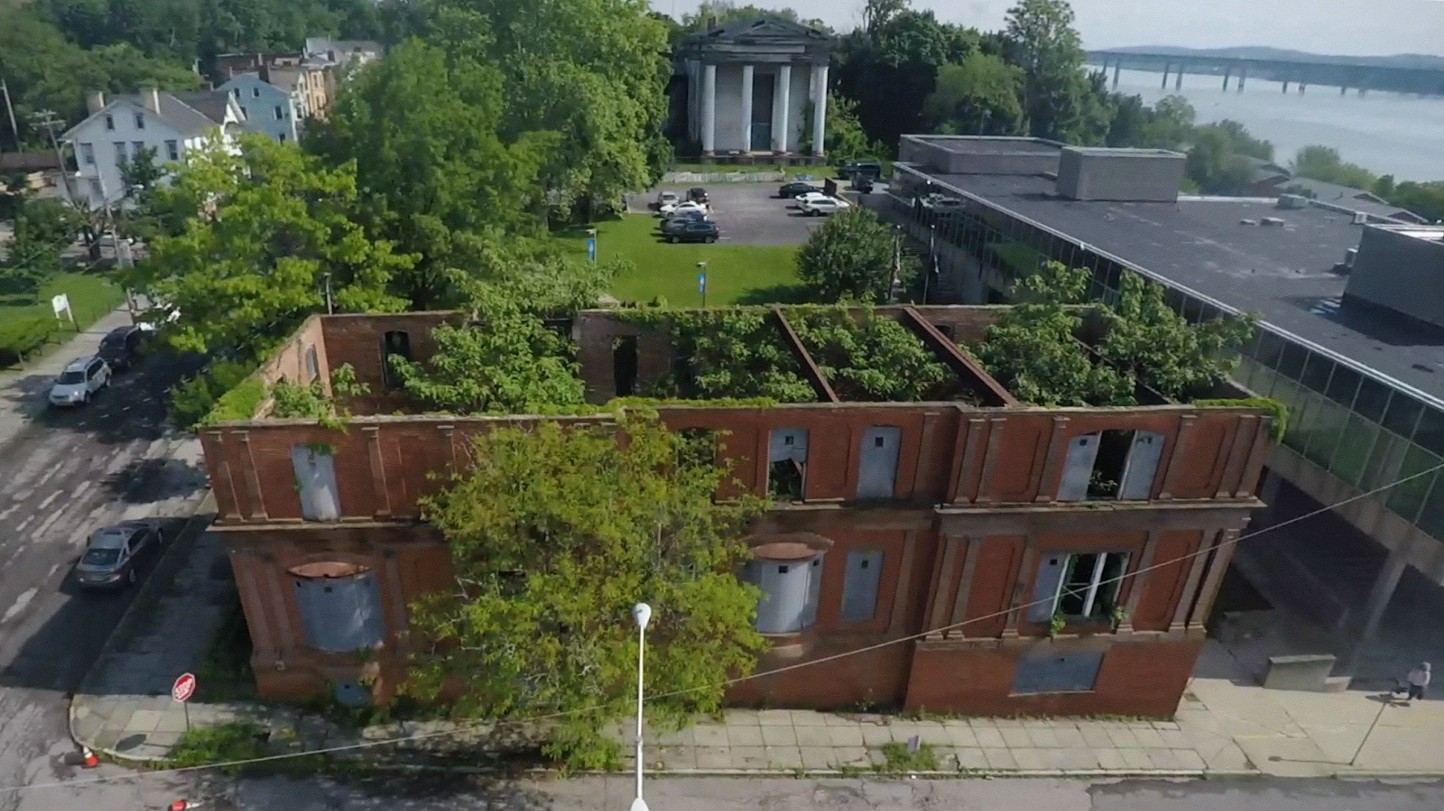 What is the sound of three plants vibrating? Behind the brick facade of a roofless brick building in Newburgh, an installation by Martin Roth seeks to find out.

Martin Roth (1977-2019) was an installation artist whose work often incorporated living organisms into pieces that unfolded narratives through poetic interpretations of sites. The titles of some of Roth’s works give an idea of ​​his process and the scope of his imagination and ambition: In October 2014, I rescued lab mice so they could play Swan Lake, In June 2012 I flooded a gallery in Austria,and From July to August 2012 I lived with sheep in Europeand In November 2017, I recovered a plant from the garden of a mass shooter. In Roth’s work, the environment itself can become a collaborator. Roth told the Creative Independent
shortly before his death: “For many people, nature is an app or something they listen to to fall asleep, a digital recording of a rainforest or something like that. My work creates a strong reaction, because of course you don’t believe that grass or trees or lavender can live inside a gallery.

Kelly Schroer, who directs Vaultan organization promoting and conserving contemporary art that interacts with the architecture and history of Newburgh, invited Roth to come to Newburgh in 2017 after seeing his work at Bard’s Hessel Museum (From January to March 2015 I grew corn for a plant concert given in a museum). The site Schroer showed Roth, 120 Grand Street, holds a special place in the city’s history. The “City Club” of Newburgh was originally built as a private home in 1852, designed by renowned architects Andrew Jackson Downing and Calvert Vaux. It is one of the last buildings in the city’s Downing still standing.

“Upright”is a relative term, as the building is now an empty shell, having been slowly overtaken by nature over the following decades. Roth’s facility, From 2017-2021 Martin Roth transforms a ruin into a garden for a green concert, transforms this accidental process into an intentional process, as he noted at the beginning of the project. “While the citizens of Newburgh are very aware of the nature that overtakes the buildings and see it primarily as an eyesore, I want to alter and shape the environment inside the building to emphasize the beauty of nature by reclaiming a site in urban setting,” Roth wrote.

While Roth passed away in 2019, his vision is coming to fruition this weekend. “Normally, I wouldn’t create a huge installation by a deceased artist,” says Schroer. “The only way that’s possible is if Martin set up a frame for the artwork and let the artwork happen. That’s how he worked. When he’s died in 2019, the framework was very advanced, he also left notes on the different types of plants to use, and the path through the installation was already underway.

What Roth imagined and began, and what Schroer completed, is a botanical fantasy in the middle of a ruin. A jungle of plants and mature trees grow atop the roofless structure while newer plantings have been installed under the tree canopy. “Martin wanted to make it feel like you were experiencing a magical garden in an abandoned building,” Schroer explains.

Among the piles of bricks and trees and plants is also a sound installation in a natural amphitheater. “It’s a concert made by trees,” says Schroer. How it works: According to Roth’s specifications, sensors were attached to three trees – “at the root and the leaves -” that transform the plants’ electrical frequencies into musical notes played through loudspeakers. The ambient sound creates a plant concert interpreted by a mini-orchestra of flora. Like much of Roth’s work, the site is a clever crop of exit conditions. “I believe if you change reality a little, everything changes,” Roth wrote.

From 2017 to 2021, Martin Roth transformed a ruin into a garden for a plant concert, located at 120 Grand Street, will be open Saturdays and Sundays from 12 p.m. to 5 p.m., July 10 through October 31. Free entry. Some upcoming discussions on the site include:

Johanna Yaun, Orange County Historian, will give a talk on “Downing and Vaux: Collaboration and Friendship,” Saturday, July 17 at 4 p.m. and Sunday, August 22 from 11 a.m. to 12 p.m.

Art historian Arnaud Gerspacher will speak on “Martin Roth and the critical possibilities of wonder” on August 28 from 3 to 4 p.m.

Botanist Peter Del Tredici will give a talk entitled “A Walk on the Wild Side: The Hierarchy of Plants” on September 25, from 3 to 4 p.m.

2021-07-09
Previous Post: Green City Solutions and Visual Art are building an eco-friendly DOOH network
Next Post: Why California has become a hotbed for ceramic art